Yesterday 60 art lovers and I climbed a bus in Modesto, CA which took us to the Legion of Honor in San Francisco.  I had not been to San Francisco in a very long time and I was very excited to see the city again.  Our bus driver was an excellent driver and managed the tight streets beautifully.


We crossed the new Bay Bridge all    painted white and it was the first time I  had seen it.  We had a nice view of the  city from the bridge and saw some of the  new, very tall skyscrapers being built.    They were so tall they disappeared into    the low clouds.  It was amazing. When we  reached the museum it was drizzling and  my glasses were all wet when I got to the  front door.


The show exhibited some of Monet's early work (1858 - 1872), which I like very much.  There were even some paintings created when he was just a teenager!  Some paintings have not been seen in public in many years.

We went down the stairs to the exhibit and the first thing we saw was these two huge paintings! (see above) "Luncheon on the Grass"  One was very long and tall and the other square and tacked to the right side of the first one. This seemed very odd to us, but I later read that Monet was working on this very large painting for the Salon, but he was behind in his rent.  So he gave it to his landlord to keep until he could buy it back.  By the time he had the painting returned to him, it was dirty and moldy.  So he cut it into two pieces.  Thus this is what is on exhibit.  To show how big they are I caught a visitor in my photo standing next to them.

HERE ARE SOME OF MY FAVORITE PAINTINGS FROM THE SHOW
Note: the frames are fabulous! 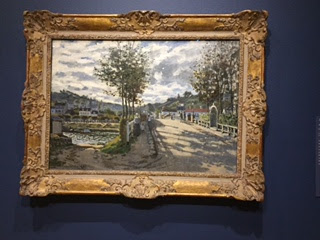 I loved this still life!
the melon is yummy and the blue plate is beautiful... the peaches are so fuzzy looking! 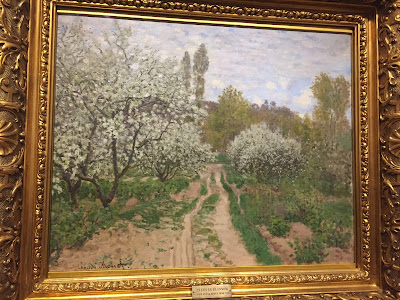 I did not catch the name of this painting, but it really caught my attention since I had just spent time painting my own almond orchard in bloom painting near Modesto a few weeks ago.

To learn more about this amazing show, click on the link at the top of this page. 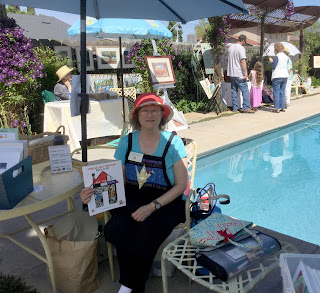 I want to thank Henrietta Sparkman for hosting us in her studio/yard.  She is such a lovely lady and so generous with her time.  Sharing the studio tour with us was Carol David, Chloe Fonda, and Corrine Robson who all make wonderful art!

It was a wonderful weekend!  The weather was near perfect and I met so many nice folks.  Everyone had an interesting story to share.

And a grateful thank you to Vickie Ellis, Diane Woods and Linda MacDannald for all their help!  We could not have had this event without them! 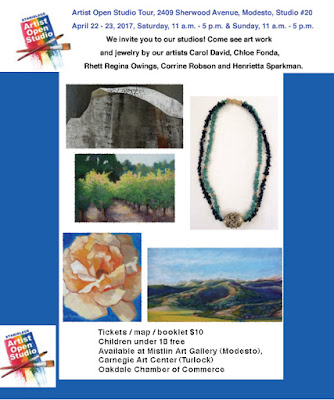 This year I will be making a change.  Instead of opening up my own art studio in Turlock, I will be joining Henrietta Sparkman at her Modesto studio.  We are # 20 on the map.

$10 tickets/tour booklets will be for sale at our location:  2409 Sherwood Ave, Modesto, CA.
From McHenry Ave. turn onto Bowen then right on Sherwood.
We will be open from 11 am - 5 pm. 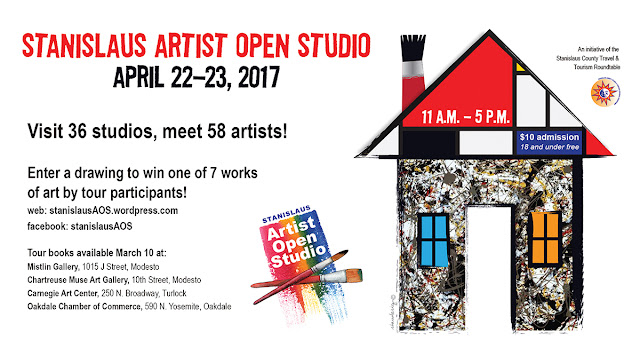 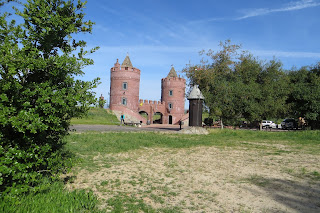 Today we went painting at Kasteel Noz in Merced County.  This place is amazing!  Casper Noz started building his dream castle in 1991.  It is nestled in the rolling foothills east of Modesto in the Central Valley of California.  You can see more of this place by going to their website at: http://www.kasteelnoz.com/ 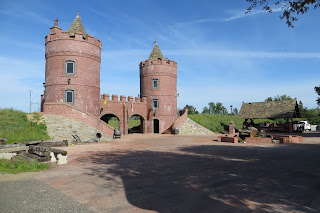 It was a beautiful day, not hot, not cold, and most of all, for an artist, not windy!  After taking a tour, we set up our easels in the court yard and began to paint.  I wanted to catch the light on the round towers before it changed.  The red brick was a pretty color and Cad Red Light and Alizarin plus white did well to paint the sunlit parts.  Adding blue helped create the shadows.

Casper seemed to like my painting and he bought it!  Imagine, the Lord of the Castle bought my painting.  I did manage to get a quick photo of it and the castle.  Scroll down to see my painting.

All in all a very fun day! 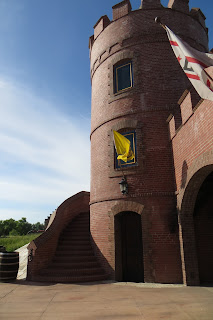 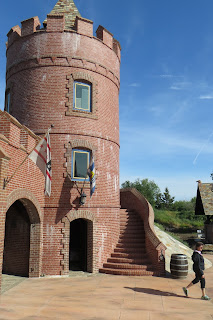 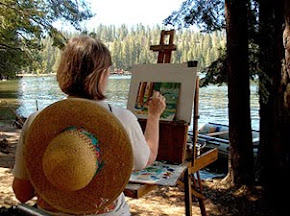